This has been Golden Week, and it’s been manic. There’s been all manner of celebration in Hiroshima, with the Flower Festival, which was as much cheap booze, taiko drums and rawk n’ roll as it was garlands of flowers. There was competitive flower arranging though. There’s a BBC2 primetime show in there, for sure. Elsewhere along Heiwa-odori, I saw comedians, maximum-energy choreographed teen dancing and also the more traditional kind. Hiroshima Sanfrecce deservedly lost to Yokohama Marinos after some poor theatrics. Familiar faces were back in town, emotions were running high. Summer is coming.

This year, festivities have had an extra significance. For many, Golden Week has gifted ten glorious days of holiday, because the traditional spring break has been extended to incorporate the changing of the guard. Emperor Akihito stood down, and his son Naruhito acceded to the throne. While I’m no sucker for royal theatrics, the era change is important, and it deserves discussion.
— — — — — — — — — — — — — —

On the last day of April, Emperor Akihito proceeded into a still, quiet room flanked by servants, who placed two boxes in front of him. One of them might have contained an ancient sword, or possibly a modern replica; since even the emperor isn’t allowed to gaze into the box, the whole thing is somewhat academic. Boy, do monarchies love these kinds of stupid mysteries. Akihito also handed over a sacred bronze mirror, before giving a short and gracious speech thanking the country. A few hours later, he was no longer emperor. The Heisei Era had ended, and the Reiwa Era had begun.

Japan has given names to eras for over 1,300 years, starting with the Taika Era in 645. The era name consists of two kanji, which nowadays must be in common usage separately (they can’t be obscure, archaic symbols), but not together. So 令 (rei– order, correctness) and 和 (wa– harmony, concord, Japan) come together to make Reiwa. I am now living in the year Reiwa 1, which will be used on official government documents.

In the past, the era name could change because of earthquakes, fires, to celebrate a royal birth or an enthronement, or just because an era got itself a bad reputation. But after 1868 and Japan’s revolution, the era name only changed when the emperor changed. So we’ve had thirty years of Heisei.

When I asked Japanese friends and students about the symbols and transformations of the Heisei Era, one of them immediately suggested the consumption tax. Introduced in 1989, it is Japan’s equivalent of VAT. An odd choice to symbolise an era, you might think- but in the first year of Reiwa, politicians are arguing about increasing the tax again, to 10%. The very first recorded imperial era, Taika, is famous for its tax reforms. Nothing is certain in life, eh…

Other themes arose. ‘So many disasters’, such as the Fukushima nuclear meltdown of 2011 and the Kobe earthquake of 1995. The internet and social media obviously got honourable mentions, along with the two Gulf Wars and their attendant controversies. Yet it occurred to me that all eras have disasters, and all eras have foreign wars. Many eras had wars which deeply shook Japan, while the Gulf Wars were distant, half-involved events. Meanwhile, I’m pretty sure the internet has disrupted Japan less than most wealthy societies (and some less wealthy ones). For sure, online gaming is popular and social media is everywhere. On the other hand, the high street more or less continues on as it did, the needle of politics has barely moved, and the big newspapers are printed for millions every day.

So is Heisei less defined by what has changed, than what hasn’t? Have we lived through an era of stasis in Japan? And what happens next? To look forward, I think we need to look backwards.

The popular story of the Meiji Restoration goes something like this. Japan opened its ports to world trade when it was forced to by American warships led by Matthew Perry. A bunch of samurai saw that the West had vastly superior technology, and wanted to modernize Japan in order to save it from colonisation. They overthrew the military bakufu government in 1868, and in short order transformed the country’s economy and society along western lines.

The popular story contains a lot of truths, but I would argue it’s not the true story. Japan was already undergoing dramatic changes. You see, when the country was reunified in the 17th century, the early Tokugawa shoguns created a severe, unbending system in which rank totally defined your life experience. People were divided into court nobles (pampered but useless), samurai, farmers and merchants. Only the samurai were allowed to own weapons, and they owed their loyalty to a daimyo or other military lord; the various lords were organised in rank by the value of their land. Everyone married within their status group, socialised within their status group, and lived within their status group. Japan was a deathtrap for disruptive outsiders, and Japanese people who left the country would be killed if they returned.

Then the system proceeded to morph beneath the surface. There were some early warning signs, of course. Merchant families in Osaka got rich enough that poor samurai families wanted to marry into them to get some of that sweet sake-and-printing gold. Masterless samurai called ronin roamed the land, questing and generally causing trouble. Ordinary farmers got literate, and started to make trouble for the military leaders with tax disputes. While Japanese people travelling abroad were still severely punished, the government started to prize information over execution, and kept the trader Kōdayū under house arrest after his four year jaunt to Moscow (1788-1792). Officially, of course, nothing had changed.

In the last few decades before the restoration, this process accelerated as the whole system started to fall apart. It started with Russian boats prowling the freezing Kurile Islands and brushing up against Hokkaido. Gradually, the firm boundaries between samurai and farmers broke down as wealthier peasants began to buy samurai status. Likewise, the boundaries between the upper classes collapsed as refined court noblewomen wed samurai; a marriage of status and power. Before the military government finally collapsed in 1868, the system it rested on was already a dead letter. Officially, nothing had changed, but beneath the surface, all was transformed.

So what does all this ancient history have to do with Heisei? Well, in the words of Mark Twain, history doesn’t repeat, but it does rhyme. I think Heisei was an era when a system crumbled beneath the surface, while remaining outwardly intact. In this respect, it was like the last decades of the Tokugawa shogunate.

Japan’s post-war society was not one I’d have lived comfortably in. The economic miracle gave Japanese people prosperity and peace, but in exchange, men worked long hours for their companies, and after marriage women generally stayed home and raised the children. At the same time, the environment was disregarded as the country was covered in concrete. People stayed in the same company for life, gradually working their way up by seniority-based promotion. But the population grew, wages rose and Japan’s position as a technological superpower went unassailed.

All of that changed after 1990, when the bubble burst. In the nineties, Japan’s economy shrank, and its status as a technology giant started to slip. With the economic decline came social changes, too, as more and more women stayed in the workplace throughout their lives. The population gradually stopped growing, and finally started to decline- this is probably good for the battered environment, but it means the country has an ageing population and an ever increasing social security check. Finally, jobs for life ceased to be an option for many young people, who find themselves frozen out of the system because they don’t have the right connections or fit the demanding social expectations of corporations.

However, a lot of these changes in the underlying reality aren’t recognised by the government or by the institutions with power in society. Japan’s social structure still favours stay-at-home mums, and women here have a really hard time getting a fair wage or promotion. My company is pretty unusual in having a female President. For young people struggling in the job market, the picture too is mixed, and many companies still protect the seniority system while younger workers end up on insecure, temporary contracts. Meanwhile, everyone agonises over the problem of an aging population and a shrinking workforce, but nobody has much of an answer. 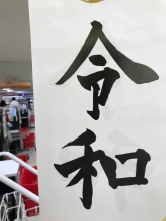 So in my view, Heisei has seen the de facto demise of the post-war economic system. However, this change hasn’t really been acknowledged by those in power, and nothing new has been built in its place (after the 2008 financial crisis, you could argue much of the western world is in the same position). But the husk of the old system can’t hold water much longer. Reiwa Japan is going to have to meet these challenges and build a new order. The country had its Meiji Restoration. Now comes the Reiwa Revolution.