We got sadder as the weekend wore on. Partly it was the sadness of the shuttered shops and empty streets, partly it was the vague sense of guilt that hemmed in our actions, as we tried to work out what we could do without being risk magnifiers for the NHS. Mostly it was the realisation that we were in this for the long haul, that soon we would be bunkered down in different towns, with no plans for summer. The cold wind off the Scottish coast ate into us, and left us lost for words.

But first, a flashback. This week has moved so fast here that British citizens have had trouble keeping up with it. On Monday 16th, after a week of creeping infection and crashing stock markets, the government advised people to avoid bars, pubs, restaurants and theatres, leading to howls of anguish from across the entertainment industry. They also encouraged companies who hadn’t implemented working from home (wfh) measures to find a way, if at all possible. By Wednesday the closure of schools in England was announced, following Scotland and Wales on Tuesday. On Thursday morning I almost didn’t go to Dundee, but in the end I decided that my tickets were booked and the die was cast. From the perspective of Monday, it does look like a selfish decision, but it’s the one I made, so no point lying about it.

I met Alex fresh from his last day in the lab. They’d spent the day making hand sanitiser, a cleansing cocktail of ethanol, glycerol and hydrogen peroxide, and something else I’ve forgotten. Dundee is the northernmost point on the globe I’ve ever reached, and my instinct in normal times would be to drop off my bag and head out to see the sights. These are not normal times, so exploring the nightlife wasn’t going to be an option. We spent the evening in the apartment, playing Super Smash Bros, discussing the extent of the fallout, and making predictions which grew wilder as the beer flowed.

In the morning we resolved to take a walk along the coast at Saint Andrews, arguably Scotland’s poshest town. Out here, where the old cathedral lays ruined by the vicissitudes of politics1, golf is the closest thing to a true religion, and a few stray souls still walked the green, putting and tutting. The golf museum, unbelievably, was still open. For more than one reason, we gave it a wide berth, and made a beeline for the vast expanse of beach.

Fenced in one one side by dunes tufted with marram grass, the beach feels like an endless plain. A few dogs splashed about in the shallows of the harbour, and occasional couples took in the sea breeze, discussing their cancelled plans and uncertain futures. All in all though, the beach was social distancing paradise. It was created, and is still being created, by longshore drift, with weak waves dropping sand on the beach in a zigzag, washing it gradually further along the shore. The constant repetition of details means that you can walk for ten or fifteen minutes and not feel like you’ve moved anywhere, until you turn around and see the cliffhouses of Saint Andrew’s receding into the distance. The whole place feels like the edge of the world on some free-roaming videogame, where the game gives up on rendering new territory and just gives you the same patterns, over and over into infinity.

Further along the coast we took in the ruins of the castle, a superb cliffside vantage point and highly effective prison. Here, an archbishop was judged to be insane and locked in his own castle. The place was already linked with religious violence when the murder of Catholic Cardinal Beaton here sparked a brutal siege in 1546; a Protestant preacher was duly burnt, to even the score and advance the glorious cause of death. Now, the ruins of the castle, like the cathedral, are behind a locked gate for the foreseeable future. At the small stone pier, the wind grew vicious, cutting into my skin. We watched two birds having a ‘you looking at me, mate?’, pointless, loutish skirmish, and then wandered back through the deserted streets, where white paper notices had been hastily tacked in restaurant windows to announce the end of normality. 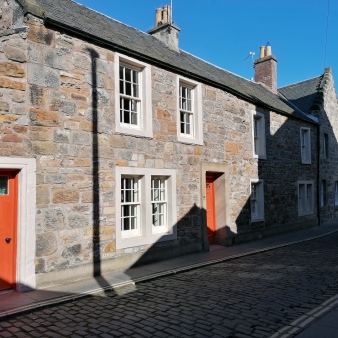 We reached the apartment in time to watch Boris Johnson announce the closure of all  bars, clubs, pubs, restaurants, gyms, leisure centres, theatres and cinemas. By this point, I think everybody knew it was coming, but somehow we were shellshocked anyway. Boris, of all people! I have many unkind words for our government and its buffoonish ringleader, but you couldn’t accuse the man of being a killjoy. We ordered takeaway, and spoke to a brewery owner who had been forced to lay off twelve staff earlier in the week.

The next day, we climbed Dundee Law, and looked down over the city of jute and journalism. From there, you can see almost the whole city. To one side, the megalithic chimney of a jute factory towers over the surrounding buildings. To the other, two adjoining football stadiums are cheek and jowl like some football hooligan’s bad idea of a joke. And straight ahead is the Tay Rail Bridge, rebuilt after Dundee’s greatest disaster, when in 1879 the bridge collapsed sending ninety passengers to their deaths. Inappropriately, the disaster is commemorated by perhaps the worst poem ever written. With apologies to William McGonagall, I must here quote it at length2:

‘While the Storm Fiend did laugh, and angry did bray,
Along the Railway Bridge of the Silv’ry Tay,
Oh! ill-fated Bridge of the Silv’ry Tay,
I must now conclude my lay
By telling the world fearlessly without the least dismay,
That your central girders would not have given way,
At least many sensible men do say,
Had they been supported on each side with buttresses,
At least many sensible men confesses’ 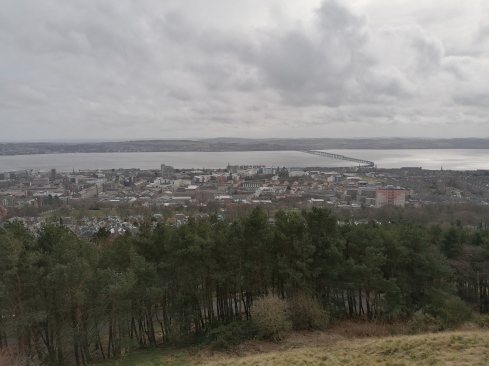 The weather in Dundee was overcast, and by the time we returned home we were sombre and withdrawn. Part of the heartache of lockdown is not being able to make plans, not being able to anticipate the excitement of the summer. Nothing is certain, and everything is on hold. We watched a dubious Vince Vaughn movie together, and tried to guess its score on imdb and Rotten Tomatoes (Alex won). We drank whisky, and toasted to nothing in particular. On Sunday, we parted ways, not being able to plan our next moves. I want to see more of Scotland’s sunniest city, and perhaps you’ll hear it here when I do.

As the scale of the crisis grows, the signs of transformation are everywhere. On my way to Dundee, Kings Cross had been practising social distancing with aplomb, and the train was about forty percent full. By the time I returned, the train was ten percent full, and Kings Cross was almost deserted. I felt vaguely guilty, and rubbed at my hands with hand gel like Lady Macbeth scenting blood, and knew that this would be the last train journey I’d take for a while.

In the wake of the new order, cafes have become shells, emptied of chairs with a skeleton staff keeping a safe distance, and behemoths of the high street like Primark and McDonalds are closing their doors. Places of worship are closed, with old-fashioned handwritten signs outside announcing the restrictions. You still see flashes of Britain breaking through, though- in the street outside my house, an old couple played a game of ‘imaginary force fields’ with a laughing postman.

So it’s back to Saint Albans, and my parents’ house, where I’ll be spending my time for the foreseeable future. Fortunately, my mother is somewhat equipped to be a survivalist; besides being a decent knitter, she’s gathered over time a conservatory full of pulses and nuts which render panic buying rather unnecessary. She’s happy she finished building her fifth greenhouse before the era of crisis set in. Alex told me Gill reminds him of the sort of character you love to meet in a post-apocalyptic RPG, one who would definitely give you a useful item for your inventory. I pointed out that you’d have to battle through a wall of dialogue first. Meanwhile, my dad is drawing, and discussing the future of his book group. We’re all watching too much news, a problem which I need to address sooner rather than later. This isn’t exactly how I planned to spend my spring, but it could certainly be worse.

My temporary job is scheduled to end in two or three weeks. After that, I don’t know exactly what I’m going to do. I’m planning to do a little volunteering in the community, and have a go at some freelance writing. If all else fails, I could ask the supermarket to take me back: I’m sure they’ll need another hand to stack shelves in this age of panic buying. While I’m charting my way through this deferred future, I’m planning to keep writing my blog, to tell my own lockdown story and the stories of others. If you or someone you know has something to say about your own place in this changed world, I’d love to hear from you- for practical reasons, I won’t be interviewing anybody face-to-face, but please do get in touch with me and we can Facetime or Whatsapp.

‘Til next time,
From Your Correspondent at Home.

P.S. sending my love to everybody who’s working in healthcare or has an ill relative right now.

1- it was destroyed by a Protestant mob whipped up by preacher John Knox in 1559.

2- The poem itself is magnificent. You can hear a dramatic reading here: