I haven’t felt much like blogging for the last few days because the auld foe is back- I’ve been having big trouble sleeping again, and teaching on a tight budget of sleep really drains you to the core.

On top of my crow’s feet, I’ve been dealing with the merry-go-round of Japanese bureaucracy- you have to have a My Number card to transfer money internationally online, but you need an application form to get that, and you have to apply for that form online, but the site’s down for maintenance for two cursed weeks. So you go to the bank, and they need some bullshit called a Notification Card for transfers, so they send you to the City Office, and they think the card was already sent to you, but you weren’t there to sign for it, so it was sent to the Ward Office, and by that point it’s five o’clock and you’ve pissed away an afternoon. Hmph.

But I did some interesting stuff last week, and if the 2010s have taught us anything, it’s that if you don’t curate your life experiences into social media content you might as well just have sat in a dark room muttering obscenities at stray insects. So, fuck it, let’s smash open the chocolate macadamia nuts and the Asahi and Just. Fucking. Do This.

Last week was Obon, a festival which is tough to engage with as a foreigner in Japan. It’s a time when people visit the graves of their recent ancestors, tending to them and decorating them with explosions of colourful paper, and sometimes with flowers. Many will travel back to their hometowns, or to stay with in-laws. Unless you have Japanese family, it doesn’t brook much involvement by the casual cultural cuckoo. But you do get time off work.

My travels first took me southwest to Yamaguchi Prefecture with Jem, a fellow teacher and general appreciator of history and good food. Jem is an irrepressible Australian with boundless energy and an infectious optimism- although he’s also slightly younger than me, so I can play the old, jaded veteran card if I need to. Anyway, we headed to Iwakuni, a castle town with an uncannily perfect wooden bridge called Kintaikyo, built with a minimum of joins. The bridge once literally contained no nails, but it was taken out by a typhoon in 1951, and when it was rebuilt I guess they decided a few nails would go down well. 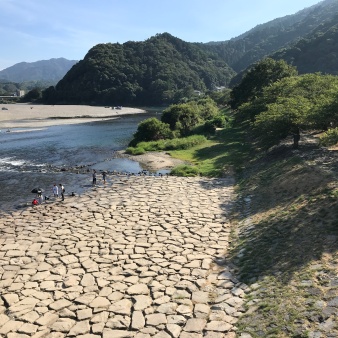 The castle, too, isn’t an original, although the old castle mound still stands. The castle was deliberately destroyed by the Tokugawa shogunate in 1615, just as they were stamping out the last embers of resistance to their rule. The reconstruction is impeccable, nonetheless. You find this a lot in Japan. The combined effects of world wars and natural disasters have taken their toll on history’s heritage, sure, but the pattern goes deeper than that. There’s an innate tendency to take apart and rebuild, with designs gradually evolving over time. Ise Shrine, the inner sanctum of Shinto which is taken down and rebuilt every twenty years, is only the most extreme example of this. I’m not sure how I feel about this kind of constant rebuilding, but the view from Iwakuni’s ramparts deserves no historical hair-splitting. 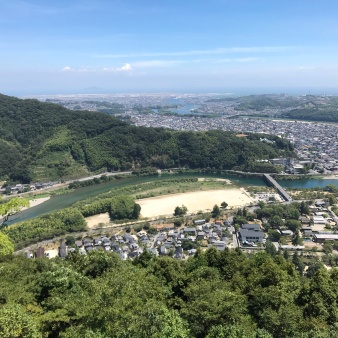 Some of the samurai artefacts at the Kikkawa museum were unquestionably the real thing though. Amongst the letters from rebellious samurai and the swords and artworks, I eyed the hairpins given by Kikkawa Tsunemasa to his wife, and a sublime suit of armour. I would wear this without question. Me and Jem took off for Kawara soba (green tea noodles, beef and egg strips) served sizzling on a roof tile, and gelatos.

Lurching ever further west, I took the Shinkansen to Fukuoka, on Kyushu, Japan’s subtropical southernmost main island. On first impression, I really liked Fukuoka. Architecturally, it seemed even newer than Hiroshima, full of gleaming glass and vertical gardens, but it’s also young and fun and relaxed, insofar as this country ever is. I even saw a Japanese dude eating in the street! If you don’t understand why that surprised me so much, spend a week here and you will. Ducking through Ōhori Park, I arrived at Gokoku-jinja (shrine), where a festival was underfoot.

It’s useless for me to explain the artistry which went into the thousands of painted lanterns that adorned Gokoku-jinja, but here- see for yourself. Elsewhere, hippyish market stalls hawked harem pants, incense and handmade jewellery- a little spoonful of Bristol to ease the homesick heart, I thought. I lost my third umbrella over dinner, and wandered off to watch the bands.

The music was… eclectic. Despite the light and colour, Obon is a festival for the deceased, and like all deep ritual, its soundtrack goes back centuries. We were treated to taiko and some ethereal folk music- drums for the dead, I suppose. A keyboard balladeer sorrowfully serenaded us. But most striking, most irregular, most unbelievable- a gospel choir! Dressed all in white and praising the sacrifice of Jesus. In a Shinto shrine. At a Buddhist festival. In Japan. In this part of the country, at this time of year, localised entirely to your kitchen… sorry, where was I? Anyway, I said in my second post that I hoped to better understand Japan’s relationship with religion, but I feel like I understand it less than ever.

After the festival, I hit some bars- not something I relish doing alone, as a rule, but it wasn’t hard to find people to drink with. Like I said, Fukuoka is young and easy going, and people were keen to talk. To be honest, though, the best place I went to was Browny’s Jazz Bar, whose entire clientele bar me consisted of four, suitably sotted middle-aged men who for all I know might never have left the place. The patron (Browny himself, no less) played me Wes Montgomery records and insisted I take his picture. I spoke barely coherent Japanese at them with more enthusiasm than usual. It was joyful.

Finally, as I wended my way home, I stopped off at one of the famous yatai stalls in Tenjin, a rough-and-ready wooden stand seating maybe ten people at a stretch. I ate magnificently rich ramen, drank plum wine and toasted the night. I’m aware how much this is all sounding like a puff piece in some ghastly travel magazine, but I really liked Fukuoka. No apologies. Fuck the hypothetical haters (if you want to trash talk me and start a feud, please do, it might make some more people read this). 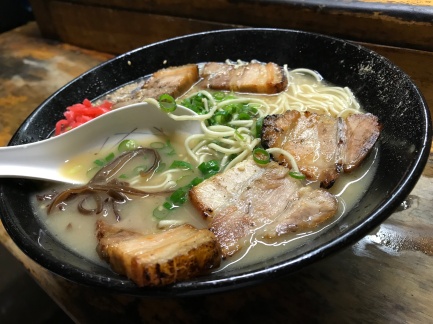 I won’t lumber you with the itinerary of my next day, partly because I can’t think of creative ways to describe another dozen shrines and temples, but mostly because I’ll never actually finish this otherwise. But there is one more thing I want, nay need, to talk about. Please follow me this way to Nanzo-in.

By the time I had left the city bounds, I was exhausted from the heat and cloying humidity. When it started to pour with rain, I was crying for joy. I bought umbrella number four- a fetching lime green-  and started climbing.

I love how the rain makes forest greens deeper and richer, especially after weeks of endless sunshine. The forest was peppered with shrines, stone lanterns and Buddhas to varying specifications. But even amid the rich verdant slopes and the brilliant red torii, the sleeping Buddha or Nehanzo is in a category of its own. Once again, words fail me- why did I decide to write a blog again?

I’m back in Hiroshima now, and back at work. Life is good, but sleep fails me sometimes and I’ve had some darker days. Expect the next blog to be less starry-eyed, and possibly full of harsh truths. That’s right, it’s time for the gritty reboot.

See you in a few days.

P.S. the travelling Pokemon Centre is only in town for five more days! If you would like a t-shirt of a Magikarp playing baseball, a cubic Bulbasaur keyring or any other absurd detritus of late-stage capitalism, please message me and we may be able to sort something else out.

3 thoughts on “Westward and Wandering”